Though, a moment’s careful looking might suggest a discrepancy or two…

Are we talking about coffee?  Or caffeine? One headline says “espressos” – so is it strong coffee we’re talking about, or must it be real espresso?  Or caffeine pills? Are they the same, do they work equally as well?  Differently?

We have of course to look at some if not all of the possibly-contradictory articles, and check what study or studies have given rise to these headlines.

Sure enough, the stories are based on the same study by eight scientists at Johns Hopkins University and the University of California, and published online in Nature NeuroScience on 12 January 2014 : Post-study caffeine administration enhances memory consolidation in humans.  Although last-named of the eight authors, Michael Yassa is the name mentioned in the press reports.

The first paragraph of the article in Nature NeuroScience (headed “Brief Communication”) reads:

The rest of the report is hidden behind a pay-wall – although we can see the full first page, using ReadCube,  and this adds some detail.  The article notes that earlier studies suggest that it may not be possible to determine whether taking caffeine before a learning session improves recall, because other factors may come into play; this study therefore investigated the effect/s of taking caffeine after a learning session.

The study was randomised and double-blind with placebo-control, conducted with caffeine-naive participants, with participants’ memories tested 24 hours after the learning session. The researchers also checked whether taking caffeine just before taking the test the next day helped enhance memory. They also tested for various strengths of caffeine, 100mg, 200 mg, and 300 mg.

So much we can read for free.  To find out more, without paying for the privilege, we must turn to the other online reports.

I thought that one of the first sites to look at should be the New Scientist site. In an article which is headlined Drink two espressos to enhance long-term memory,  Simon Makin tells us that the crucial part of the test is determining which images are similar.  It seems that those who had 200mg of caffeine after first looking at the images scored better than those who received the placebo and therefore no caffeine at all.

In the Guardian article Coffee may boost brain’s ability to store long-term memories, study claims, Ian Sample gives us more detail, telling us more about the learning session (participants were not asked to memorise the pictures, just to say whether they were objects normally found inside or outside), and that the memory recall of the caffeine-taking group was 10% better than those taking the placebo.

Most press articles suggest that 160 participants took part in the study, although the Guardian and the University Herald articles report 44 participants, and Nicholas Bakalar in a New York Times blog reports 73 participants. 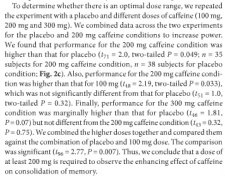 None of the press reports at the top of the Google results list noted that the scientists had looked at the effects of 100mg or 300mg intake as well as 200mg – though we can read in the ReadCube preview that 100mg was only marginally better than the placebo, and that 300mg test results were no better than 200mg.  It seems that 200mg might be the optimum dose.

Few reports suggest that the number of participants (whether 44 or 160) might be on the small side for conclusive conclusions to be concluded; the Guardian article is an exception, noting some criticism of the size of the sample.  My last post, Texas Sharp-Shooting, includes more thoughts on sample size and similar issues.

None of the reports pick up on the fact that the participants were “caffeine-naive” – so we do not know how helpful a mug of strong coffee would be as a memory enhancer to those who drink a lot of coffee, especially if it’s strong.

I’m still not sure whether caffeine and coffee are the same. While many reports suggest that the average cup of coffee is equivalent to about 150mg caffeine, so 200mg is the caffeine content of a strong cup of coffee, the BBC News article Caffeine pill ‘could boost memory’ is headed by a photo of a pile of coffee-beans,

and the caption reads:

“Could beans be transformed into pills?“*

So, does the dose need to be a caffeine pill or will coffee do the trick?

With due respect to the scientists and their expertise and experience, and very aware that I have not read the full original paper, I cannot help thinking that a lot more research is needed, many more variables need to be considered, especially regarding sample size and caffeine-naivety, time as well.

Time!  For although there is, perhaps, something implied in the headlines of those articles which use “short=term,” there seems to be no discussion in the press reports of the researchers’ use of “long-term” in the closing sentence of the abstract “We conclude that caffeine enhanced consolidation of long-term memories in humans.”  Long-term?  Given that the tests were administered just 24 hours after the learning session, we need to know more, far more, about how they reached that conclusion.

For that, it seems, we need to pay – or find a library which subscribes to Nature NeuroScience.  To be continued (perhaps).

I am not a scientist and there is much in the paper, that part which I can read, that I do not understand. I rely on science correspondents to explain the science in terms a layperson can understand.  I would hope for more agreement amongst the journalistic reports.

Note: lost in the proof-reading, both the picture and the caption to the screengrab from the BBC page, marked *.   The image and the words “Could beans be transformed into pills?” were added on 29 March 2014.

2 thoughts on “Memories are made of…”