One reason I like an author-date style of citation and referencing is the date element: sometimes it is important to know just when a cited source was published. The standards and formality of academic referencing are not expected in non-academic settings such as blog posts or journalism or popular science – and perhaps, more’s the pity?

Regular readers will know my bugbear, that oft-quoted statement, “Recent studies indicate that approximately 30 percent of all students may be plagiarizing on every written assignment they complete.”  Not only is this statement absolute balderdash not least because the claimed studies never existed, the repeated use of “recent” is an irritation in itself. As noted in an earlier post, Thirty percent, the claim was first made in 2001, and fourteen years hardly qualifies as “recent,” not when we are talking internet history. This particular claim is regularly attributed to plagiarism.org, accurate in itself, but rarely do we see the date, and that should give us pause…  In the post, I also remarked on the occasional “updating” of this claim, which makes for different difficulties, and serves to perpetuate the misinformation.

News that a ‘smart’ fridge had been sending out spam emails this week highlighted the emergence into the mainstream of a trend called ‘the internet of things’ that has been bubbling away for some time now in tech circles.

I had an immediate feeling of deja vu, this is – surely – an old story.  I was certain I had read this before, something like this.   In blog posts, the usual way of citing a source is simply to provide a hyperlink to the original.  When I clicked on the link provided here, I was taken to a BBC News story, Fridge sends spam emails as attack hits smart gadgets, 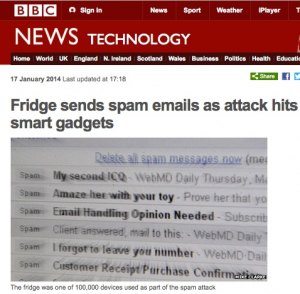 and there’s the date: 17 January 2014.  Just four days earlier – four days plus a year earlier… Hardly “this week.” I read the rest of Helmer’s story, but my heart wasn’t really in it.

I’m not calling for bloggers to adopt the standards of academic referencing – but I would just throw out this thought again, that referencing can be useful as a means of source evaluation, as a means of establishing credibility, authority, reliability, and recency, and more, much more.