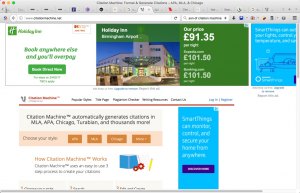 Several of my earlier posts point directly or indirectly to shortcomings in these services.  Their auto-citation generators leave much to be desired. They also leave much to be edited or added after the reference is auto-generated. A common plaint is that students don’t do this – they unthinkingly and uncritically accept auto-generated output no matter how many errors or omissions.  Alas, the manual form-filling modes are often not much better. Too often END_OF_DOCUMENT_TOKEN_TO_BE_REPLACED

This is not to denigrate the RefME software itself. I have no opinion there. Until I bought a new computer a few months ago, I found the app hung up too often to enable a valid critique of its performance as a reference (or citation) generator. Now, I find it END_OF_DOCUMENT_TOKEN_TO_BE_REPLACED

There is much to suggest that many students go through secondary school and enter university believing that they understand how to document their use of source material correctly and appropriately, when all they have learned and practised is making an alphabetical list of sources at the end of their work. When told they need to cite their sources, END_OF_DOCUMENT_TOKEN_TO_BE_REPLACED