Every so often, we have a good laugh – or cry – at a newspaper report of someone who, believing their GPS rather than their own eyes, drives a high vehicle into a low bridge, or drives into a river,  or maybe drives 3000 km across Europe on what should have been a one-hour journey. No, surely not?

And then there is Turnitin. I often wonder whether Turnitin and its sister companies sometimes get carried away, believing technology to be infallible, dazzled by their own publicity and advertising copy.

I have touched on Turnitin’s often “interesting” interpretation of statistics and studies in earlier posts (for instance Floored by flaws and Flattering flaws), and I have more thoughts in store as well (watch this space!) 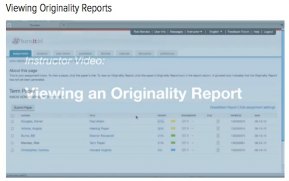 In this three-and-a-half minute clip, we are shown how Turnitin’s Originality Check highlights text in the student paper for which matches have been found, and the “matching sources it found on the right” (verbatim, from the clip).  We are also shown different ways of viewing the report, shown that Turnitin finds alternative sources of the same matched text, and shown how to eliminate bibliographic text and how to eliminate any material in quotation marks because these are less likely to be instances of plagiarism.

In the clip, the example shown is a four-paragraph essay of questionable quality (?) on the late Paul Arden. I wonder what the assignment was? 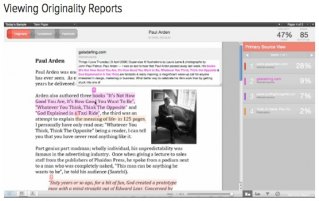 Note the four passages for which matches have been found; in the order in which they appear in the paper, we have: 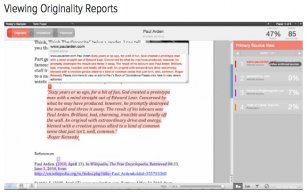 >  three book titles
>  a seven-word string of text: “the meaning of life in 125 pages”
>  a long indented quotation, with named author
>  a full reference to a Wikipedia article, apparently the source of material in the first paragraph in the essay.

All these are flagged. They are matches.  Well found, Turnitin.

The three book titles and the Wikipedia reference, there isn’t a lot we can say about these.  Matches they are, plagiarism they are not.

The indented and attributed quotation is more difficult. The essay-writer is making no claim that this is his (or her) own. But – unless there is a full reference in the reference list giving details of where the Roger Kennedy quotation was found, then this may be flawed. Unfortunately, the camera shows only the first of the references listed; there is at least one more reference, but most of it is lost at the bottom of the screen.

Is this plagiarism or isn’t it? Only the teacher can tell, looking at the full reference list, and if there is no source given for the Kennedy quotation then perhaps it is.  Or perhaps the writer does not understand how to reference somebody else’s quotation (secondary reference) and needs help.

The narrator, telling us how wonderful the technology is, misses the opportunity to discuss the teacher’s view of the report, and the purpose of referencing and the nature of plagiarism.

And, since Turnitin allows us to disregard material within quotation marks and to disregard bibliographic references, we are left with just the flagged seven-word string, “the meaning of life in 125 pages.”  Although the right-hand column of matched sources shows that the software thinks it comes from an article in “Hall of Fame,”  I am more inclined to think it comes from the Paul Arden website, which is where the Turnitin spider found the Roger Kennedy quotation.  It may also be – is probably – where the writer found the image,and let’s disregard the fact that Turnitin did not find a match for this picture, that the picture carries no citation or reference, and thus might itself be classed as plagiarism.

So there we have it – one seven-word match. What is the teacher to do?  Again, no discussion on the video clip, but isn’t the technology wonderful?

Or perhaps not.  There is still that third paragraph, in which and for which the software found no match:

No match? I rather think this is taken verbatim from part of the obituary in the UK newspaper The Telegraph: (5 April 2008):

What’s more, the Telegraph obituary is one of many tributes included in full in a page, “Editorials,” on the Paul Arden website, the site on which Turnitin found the Roger Kennedy quotation. That’s TWO chances missed!

Part genius part madman: wholly individual, his unpredictability was famous in the advertising industry. Once when giving a lecture to sales staff from the publishers of Phaidon Press, he spoke from a podium next to a man who was completely naked. “This man can be anything he wants to be,” he told his audience (Saatchi).

They might not. A Google search for any of these words which includes [Saatchi] is unsuccessful, suggesting not. Given that the portrait used, the Kennedy quote, and the passage from the Telegraph obituary can all be found on the Paul Arden website, it seems more probable that this is where our student found much of the material.

Is it plagiarism? The narrator has got a lot of points to investigate and all worth discussing with his audience, but the opportunity is missed.  As the saying goes, never mind the quality, just feel the width. But, main point here, Turnitin should have found these matches online, whether cited or not – and it did not.

Most aware teachers would class this “essay” as highly flawed, if not full-bodied plagiarism.

Unless they too rely on Turnitin.

It’s not just Turnitin, of course, but this company is probably the best-known and most-widely used of the various online text-matching services available. And if it’s as good as its own training-clip suggests, then the GPS analogy is perhaps not too far-fetched.

4 thoughts on “Carried away”