Let’s start with the story. While writing to an American friend, I wanted to give her a link to the debate over the BBC’s dilemma as to whether to play “Ding-dong! the witch is dead” on its weekly top of the music charts radio programme this week.  “Ding-dong…” is a short number from the 1938 musical The Wizard of Oz, and has been adopted as the anthem of an anti-Thatcher FaceBook group. Since Thatcher’s death earlier in the week, the number of downloads has been huge, huge enough to push the song into the top-selling music charts.

And the record which has been rewritten? 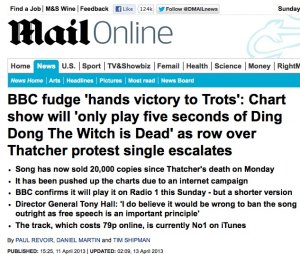 Looking for a newspaper item which covered the story for my friend, I was led to the UK Daily Mail online, and who could resist reading on after a headline which reads: “BBC fudge ‘hands victory to Trots’: Chart show will ‘only play five seconds of Ding Dong The Witch is Dead’ as row over Thatcher protest single escalates“?

Further down the page was a more-on-this-story section with a list of links to other stories. Heading the list was

“‘They danced in the streets when Hitler died too’: Drama teacher who organised Thatcher death parties remains unrepentant as it’s revealed she had NHS breast implants”

This was one of those “Yer-what?” moments.  What has the drama teacher’s medical history got to do with her remarks and actions? More puzzling, when you click on the link, you are ta

ken to a page which has no mention at all of the drama teacher and her remarks, her parties, her physical features or her medical record. The Daily Mail redirects you to another piece of anti-Thatcher sentiment;  perhaps it had second thoughts about the dance-in-the-streets piece? 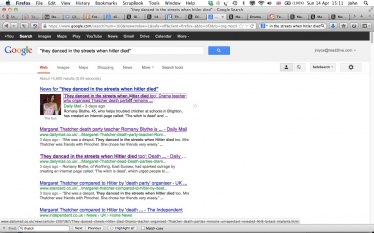 a Google search for [“they danced in the streets when hitler died”] leads to a search results page which has three Daily Mail links as the top three hits.

The first two hits both lead back to the “Burn in hell” page.

Curious, because when you put your mouse over the link in the Google results list, you get respectively (at the bottom of the screen):

That’s two different article reference numbers, and three different URLs.  Fortunately, the third hit takes us to the story, or at least a version which the Daily Mail is either happy to publish, or a version which has been missed in their clean-up/ rewriting of the record. Here it is, just in case it disappears, just like the others: 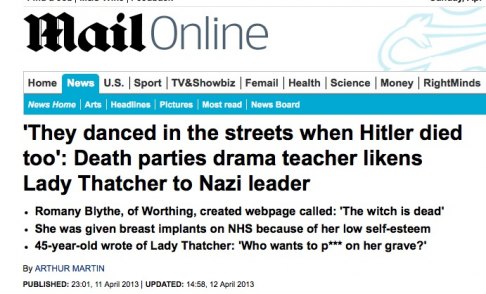 I have written before on the problems, for the record, when it is not made clear that stories in newspapers, magazines and journals have been changed, corrected or retracted. Here’s another slant. Sheer witchery?