I thought the feature had gone berserk the other day. My alert for “every written assignment they complete” usually gives me just one or two hits a week.  This week’s digest gave me forty hits. 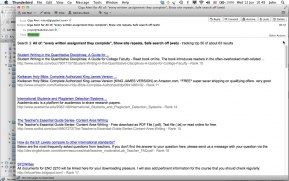 It did not take long to realise that

(1) instead of the usual phrase-search, I was getting results as if the quotation marks weren’t there – the hits showed all five words, but in any order, anywhere on the page;

(2) this was not Google’s Alert service, this was the other alert service that I use, Gigaalert (formerly GoogleAlert), that had gone berserk. This time, Google was not to blame.

But it was a timely reminder of this search phrase. 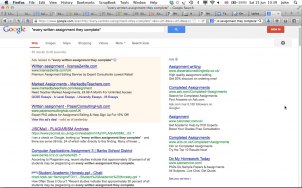 This search leads to a claim, a self-perpetuating mutant statistic, a statistic with a life of its own, one which just keeps rolling along. Even today, a Google search brings up the exact phrase on some 50 web pages (and do try to ignore the advertisements, some of which link to sites offering what may be ethically dubious services).

The statistic, the claim, if attributed at all, is usually attributed to plagiarism.org.  It runs  “Recent studies indicate that approximately 30 percent of all students may be plagiarizing on every written assignment they complete.”

The claim was posted on the Turnitin website between 2001 and 2007.  It is no longer available at the original URL <http://www.plagiarism.org/problems.html>, but you can still find it in the Internet Archive. 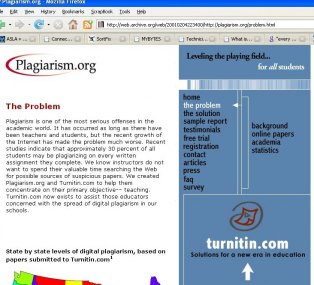 It’s an amazing and a startling thought: almost one-third of every class is plagiarising absolutely everything they submit in writing, and they appear to be getting away with it!  And that does not include the rest of the class, who could well be plagiarising now and again.

I wrote to Plagiarism.org at the time, asking if the students surveyed were students all over the world, or just American students in the USA, and also if the studies were of university level or secondary level students. My third question was, “Where is the attribution? What recent studies?”

I did not get an answer from Plagiarism.org (which, as can be seen in the screengrab), is a sister company of Turnitin.com.  I did get answers from subscribers to several listservs on which I also posted these questions, though nobody knew of any studies, recent or otherwise. The most helpful responses I received suggested either that I had interpreted the datum too carefully, that what was meant was that one-third of all papers submitted included an element of plagiarism, or pointing out the weasel-word qualification: may : 30% of all students may be plagiarizing on every paper – or they may not be!

Apart from the anonymity of those “recent studies” that nobody knew about, the real problems with this mutant statistic today are that (1) it is still being quoted, (2) writers who use it do not seem to try going back to the original statement, it is taken as verbatim fact, and (3) it seems almost always to be credited to Plagiarism.org, and not to the source in which each current writer actually found it. 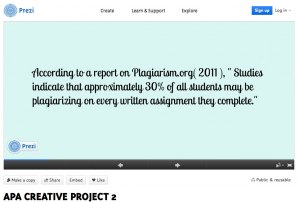 What is even more disturbing is that the factoid is occasionally given new life.  By updating the statement to 2011, this writer for instance made those no-longer-recent anonymous studies seem (possibly) recent again!

Here’s a thought.  Google (and other search engines) will pick up this blog post, and someone soon will cite either Royce (2013) or Plagiarism.org (2013) as claiming that …

I can only hope that anyone coming across the Royce (2013) statement will follow it up (as they should), get to this page, read it (is that too much to ask?), and realise that the claim is not worth repeating – and probably never has been.

We do not know how many students plagiarise, on any one assignment, never mind every assignment.  We might be able to calculate the number or percentage of given assignments which include an element of discovered plagiarism, but that’s a completely different claim.