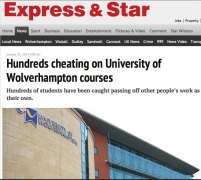 The story, as so often, may be a little less dramatic than the headline suggests. Yes, hundreds have been found guilty of plagiarism: to be exact, 318 cases in academic year 2012/13. But that is 17% fewer than the 383 cases discovered the year before, 2011/12. That’s not a cause for dismay and shock headlines, surely.  Isn’t this cause for celebration, not alarm?

It is still too many, of course, but given the 23,000 students taking University of Wolverhampton courses, this also suggests that 98.6% of all UW students are NOT plagiarising – or at least, if any have been plagiarised, they were not found out. 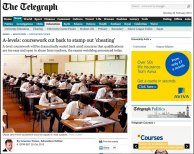 Then there is the headline in The Telegraph: A-levels: coursework cut back to stamp out ‘cheating’.

The sub-headline makes this story especially intriguing: “A-level coursework will be dramatically scaled back amid concerns that qualifications are too easy and open to abuse from teachers, the exams watchdog announced today.” The suggestion here is that teachers, as well as students, are behaving in ways that advantage their own students while disadvantaging those in other schools. 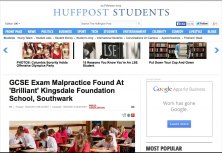 And that may be true, if the Huffington Post story is in any way typical: “GCSE Exam Malpractice Found At ‘Brilliant’ Kingsdale Foundation School, Southwark.”

The amount of coursework in schools taking GCSE and A-level examinations in England and Wales is being cut back, and in large part it appears to be because of cases of malpractice.

It really does seem that many teachers are behaving in ways that advantage their own students while disadvantaging those in other schools. An OfQual report, Malpractice for GCSE and A-Level: Summer 2013 Exam Series,  shows that in the Summer 2013 exams, 97 teachers received penalties for malpractice, ranging from written warnings through to suspension and other conditions with regard to their involvement in future exams and assessments. Schools came under scrutiny too; in the same session, 135 schools were penalised for not adhering to the requirements of an exam. Malpractice included such acts as opening question papers early without authorisation, allowing candidates to sit an exam at an incorrect time, and providing insufficient invigilation during an exam.

And students too, of course. The same report records that in the same examination session, 2590 students were penalised for malpractice; the penalties ranged from written warnings to disqualification from the exam.

Whether coursework and the opportunities to take shortcuts is to blame is moot. Of 8 categories of malpractice, most of those reported by OfQual can happen only in the examination room, as “Introducing unauthorised material into an exam room,” or “failing to follow instructions from invigilators, supervisors or the exam board,” or “disruptive behaviour in the exam room (including use of offensive language).” One category is (probably) a matter of distaste rather than malpractice: “including inappropriate, offensive or obscene material in exam papers or coursework;” this category does not distinguish between coursework and examination papers.

There may be good reasons for cutting down on coursework, but possible malpractice – especially by candidates – does not seem to be the greatest of these. And yes, malpractice by teachers happens, but again the number of cases is not huge.

Statistics don’t lie, but many may be open to alternative interpretation.  We don’t need misleading headlines to help.