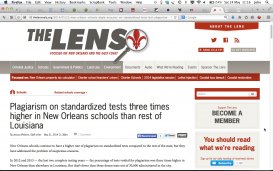 It is worrying for two reasons. There is the question, why is the rate of plagiarism so much higher in New Orleans than in the rest of the State?

And there is the question, how do you plagiarize on a standardized test?

The answer, it appears, is in the definition of plagiarism.  Plagiarism, according to Test Security Irregularities 2012-2013 School Year, published by the Louisiana Department of Education in January 2014, is indicated by

… written responses that have suspect or common elements, indicating potential plagiarism such as a student brought unauthorized materials to testing and used them to assist in writing, copied another student’s response, or that teacher interference might have been a significant factor.

That is, surely, a questionable definition. Bringing “unauthorized materials” such as cheat sheets or programmable calculators or cell phones (and maybe writing on one’s leg or shirt cuff too?) are usually regarded as cheating in an examination, not as plagiarism.

Copying a fellow students answers (or sending or receiving signals) (or just plain talking?) are, again, forms of cheating in examinations, but they are not usually seen as forms of plagiarism.

And receiving direct or indirect help from a teacher is again not usually seen as plagiarism. It’s cheating, but it is not plagiarism.

It is very difficult to commit plagiarism in a closed-room closed-book examination. What seems to be needed is more awareness and better proctoring. And better definitions.

Plagiarism is a big enough issue – but maybe it is not as widespread as we are sometimes led to think?

1 thought on “Its ugly head”