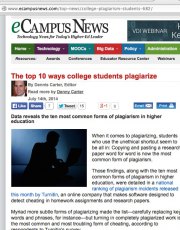 According to the article, Turnitin’s study was released “this month,” and there is a link to the Turnitin White Paper The Plagiarism Spectrum: Instructor Insights into the 10 Types of Plagiarism.

There is a Times Higher Education article on it, published January 2012.  Perhaps that is where Carter found his January date for Youmans’ research?

But even more troubling, Carter’s article was originally published in 2012, possibly in May, as evidenced by Fe Angela M. Verzosa’s curated Scoop. Carter himself sent the bulk of the article to MPH in March 2013 – it is posted in the Bkn-mph-alumni mailing list archives.

eCampus News is a free education journal held in good regard, so perhaps one shouldn’t be too critical. Nevertheless, even if it is the practice of this journal to re-hash old articles, it would be kind, it would be honest, to state that a particular article first appeared on such a given date. It would be kinder still to update the article and not make misleading statements.

Otherwise, we might just have to think of the P-word?