There is much to suggest that many students go through secondary school and enter university believing that they understand how to document their use of source material correctly and appropriately, when all they have learned and practised is making an alphabetical list of sources at the end of their work. When told they need to cite their sources, they nod and say that this is what they know and what they do (and it just isn’t so).

Turabian8, the student version of Chicago style, advises us (Author-Date Style, p. 139) to

… signal that you have used a source by placing a parenthetical citation (including author, date, and relevant page numbers) next to your reference to it

Note here the double use of “reference.”

It may not matter too much as long as one consistently uses the same documentation style. But it may be supremely confusing when students come across different meanings applied to these terms. This is a point worth considering in schools and institutions which require students to use different styles for different subjects. especially if this is required before students have really mastered even a first style or have yet to understand the reasons for citation and referencing….

I am not saying that all students are confused. I am suggesting that some students may be confused. The confusion might not always be obvious; it is only when a student makes mistakes that possible mis- or non-understanding may be discovered. Certainly I have come across students who seem to understand what is needed in classroom exercises, but who seem unable to transfer what they have learned to other situations or to other subjects.

Today I found another possible reason for confusion between the terms, a possible transatlantic difference in terminology. I have been exploring the RefME site. RefME is a citation generator. Unless it is a reference generator. A citation generator – or a reference generator – is an online service which generates citations. Or references. The bits at the end which list all the details which enable a reader to find or go to the exact source cited (or referred to) in the text. 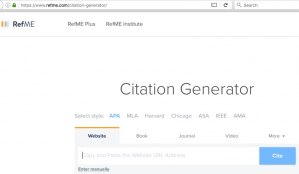 while the RefME UK site uses the term “Referencing Generator” 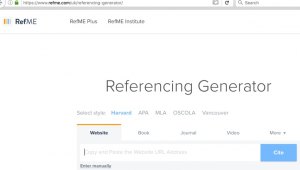 One can choose from a range of styles – RefME claims to provide auto-generation of more than 7500 referencing (or citation) styles.  Here are screengrabs taken lower down the APA pages:

from RefME’s US APA Citation Generator 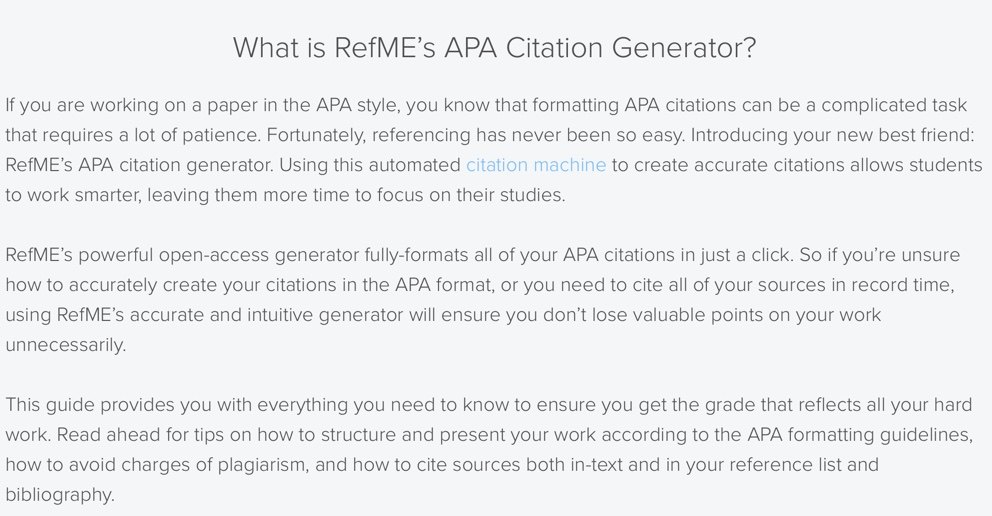 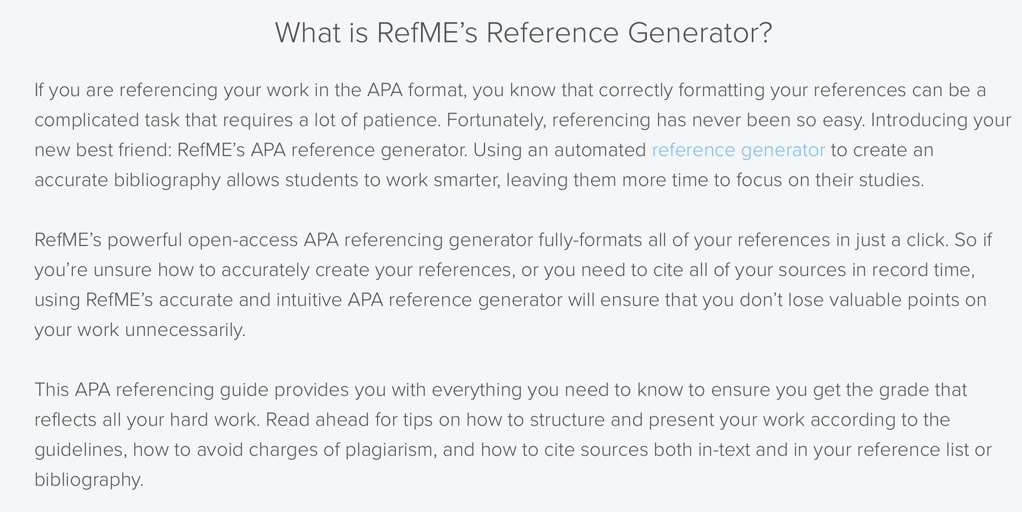 Apart from the title and the use of these terms, the text is, by and large, identical, right down to the last part of the last sentence in this section of the respective pages where we see

“Reference” or “citation” – does it really matter which term we use?

The quick answer is “No, it should not matter.”

A more considered answer suggests that it could matter very much indeed when incorrect citation and/or referencing is taken as instance of plagiarism or other form of academic misconduct.  Whether such instances are indeed indications of misconduct depends in large part on whether the incorrectness appears in the citation or the reference (and thus the importance of being sure what these terms means and how they are used). and whether the notion of incorrectness is taken to include incorrectly formatted citation and/or references (see What’s in a name? and Orders are orders for further explanation and examples),

Incorrect citations and incorrectly-formatted citations are NOT the same thing.  If I write (Hawking, 2012) with a comma or just (Hawking) when my style guide and usage elsewhere in my essay suggests that the citation should read (Hawking 2012) with no comma, this is (surely?) NOT misconduct.  It is incorrectly-formatted citation, careless scholarship, perhaps deserving the loss of a point in my assessment but there is no intent to mislead and the reader is not misled.

If, on the other hand, I write (Hawking 2012, 311) when my quotation is taken from page 15 of my source and should therefore read (Hawking 2012, 15), this is a much more serious case. I am falsifying my evidence – but this is not an incorrectly-formatted citation, it is an incorrect citation, period.

Similarly, if I cite (Hawking 2012) as my source when in fact my source was (Watson 2007), I have again made an incorrect citation.

Incorrect citation may indicate academic misconduct. Incorrectly-formatted citations are equivalent to grammar or spelling mistakes. They should be regretted, they may lose a mark or two, but they are NOT instances of misconduct. They are definitely not instances of plagiarism, because there is no attempt to claim that the quotation or other evidence cited is my own work.

(It may again be different if I have made up the quotation or changed the figures in a table; these are also forms of misconduct. For this piece, though, I want to concentrate on citation and referencing and not on what has been cited and referenced.)

Similarly, there is much difference between incorrect references and incorrectly-formatted references.

An incorrectly-formatted reference may have the elements in the wrong order or use the wrong punctuation – “wrong” in terms of the referencing style being used. Again, this should not matter, it might not even be noticed, if the wrong-ness is applied consistently in the list of references. If there is inconsistency, then again, a mark or two might be deducted. Inconsistently formatted references are NOT in themselves instances of misconduct.

An incorrect reference, on the other hand, suggests that Watson’s 2007 paper is included in Patel’s collection of readings, pages 47-62 when Watson’s paper is not included anywhere in the collection. Poor scholarship at best, but more probably (?) a deliberate attempt to mislead, and that would indeed be misconduct.

It matters indeed if students are led to believe that incorrectly-formatted citations and references are cases of academic misconduct and are subject to consequences. It leads to angst, to fear of making mistakes in citation or referencing, possibly to a fear of using other people’s work at all. It can take the fun out of research and of writing, by making citation and referencing seem to be the whole point of the exercise, when it is the students response to a question or a title, supported by evidence, which is the real intent of the assessment. It can stultify the imagination and deaden critical thinking. (Colin Neville’s work and especially The challenge of referencing makes a good starting point for anyone wishing to pursue these thoughts.)

It may lead some to think they already know all they need to know about citing and referencing, with the possibility that they switch off when they hear yet another (boring?) lesson about citation and referencing, or worse still, about academic honesty, dishonesty, and/or avoiding plagiarism. Chanock and Newton provide good take-off points for pursuing this line of thinking.

It is all very confusing. It is like moving goalposts and changing the rules – but not telling anyone – while the game is in session. The issue is more problematic when students believe they will be punished for formatting errors and even worse when they are punished. And they do and they are – as I discuss in my next post. And that is just a starting-point.

1 thought on “Language and labels”