It is sadly ironic when someone writing about plagiarism (with the intention of helping readers understand what plagiarism is and how to write correctly) commits plagiarism.

It happens all too often. I am sure that, in most cases, it is unintentional. The trouble is, readers of their work may sometimes be confused, especially if confused examples are presented. As instances, there are writers on plagiarism who still seem to believe that it is enough to list their sources at the end of a paper.  There are some who appear to think that citation in the text is enough, but are apparently unaware (or who forget) that quoted words demand quotation markers (such as quotation marks or indented paragraphs or a change of font).

I don’t know what to make of the writer of the article, “Planting Seeds,” published in Blossoms: the official newsletter of Abuja Preparatory School (No. 25, 9 March 2016).

The newsletter is aimed at parents. Full credit to the writer for trying to help parents understand what plagiarism is, and understand how students can legitimately use other people’s words and work [“All they have to do is always acknowledge who and where they got it from”]. There is also a section on how some forms of help which parents often give are actually unhelpful, not least because they encourage bad habits and understanding/s. I am particularly impressed that this school takes students up to year 6, ages 10 to 12. I believe the earlier the values of honesty and integrity are inculcated, the better – the awareness of honest use of others’ work is “planting seeds” indeed.

But there are two paragraphs in the newsletter article which give me pause.

The first of these is the one which repeats that old canard, that dangerously misleading statement:

According to a report by Plagiarism.org, “Studies indicate that approximately 30 percent of all pupils may be plagiarizing on every written assignment they complete.”

My guess is that the writer of the newsletter did not find this statement on the Plagiarism.org website.  It appeared on that website between 2001 and 2007 (as captured by the Internet Archive), but was removed about nine years ago. I suspect the Blossoms writer found this on one of the sites which serve to perpetualise the statement.  Those introductory words, “According to a report by Plagiarism.org…” are not the  Blossoms writer’s own words, they come from the second-hand site.  And if I am right, then this site too should be included in the  attribution (along with a double set of quotation marks).

My suspicion is given further weight by two factors. The first is that no URL is given (whereas a live URL is used in the next paragraph, supporting the next point made). The writer knows about URLs and links.

The second lies in that the original Plagiarism.org statement actually reads

Recent studies indicate that approximately 30 percent of all students may be plagiarizing on every written assignment they complete.

The Blossoms writer users the word “pupils,” not “students.”  Normally, quotations quote the exact words used and signal if other words have been used or inserted.

What is especially damaging and dangerous is that this so-called research finding may well have been misreported, maybe even fabricated, in the first place: Plagiarism.org would not, could not and did not say at the time – nor since – which studies, recent or otherwise, had promoted these findings. (For more on this, see my earlier post Thirty percent).

The second paragraph which gives me concern is the one immediately following, split between two pages of the newsletter: 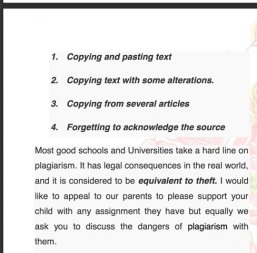 Molly Pennington, PhD (www.noodle.com/articles/tips-to-help-your-child-avoid-plagiarism) lists a number of different ways in which children can be found to plagiarize. Here are some common methods of plagiarizing that pupils employ:

The text makes it clear that the list of suggestions, 1 to 4, is based on a piece by Molly Pennington. Indeed it is. (Pennington actually has 5 suggestions in her list; the missing heading is “Turning in prior work”).

The list is Pennington’s.  What is troublesome is that the sentence following the list is also Pennington’s, and even more worrying, these are words copied almost verbatim from Pennington’s piece (per the screengrab and highlighted extract below):

So, two more points: these sentences need a link such as “Pennington also says that …” to show that this idea is taken from the same article.  And probably more vitally, those highlighted words should be in quotation marks.

Now I appreciate that nobody is going to read the Blossoms article, follow up by turning to Pennington’s article, notice the copy-paste lift and think, “Ah, this is okay to do, this is how to use someone else’s words, this is how it’s done.”

But it does make me wonder if the Blossoms writer has full appreciation of how properly and ethically to use other people’s words and work. If not, then what is being passed on to the children at Abuja Preparatory School, is misleading. Wrong.  Such misunderstandings seem often to be well learned and never forgotten, are carried through to adulthood thinking this is all we need to do… until problems are met, or somebody points out that such practice is wrong. Sometimes the consequences are severe.