A month or two ago, but within the space of two weeks, three very different, very similar, situations:

Situation 1 : a student in a school in Asia wrote a comment on an earlier blog post, How Much Plagiarism?  asking for advice. She had misunderstood the instructions; she “forgot to include in-text citations” in the draft of her IB extended essay. All her citations were at the end of the essay. There was no intention to plagiarise.  Since this was a draft, the IB is not involved;  there was still the opportunity to put things right. But she was worried about her school’s reaction which could include note of her transgression on future university recommendations. Her question was, is this excessive?

Situation 2 : an inquiry on an OCC forum: it was the school’s deadline day for submitting final copies of extended essays.  One student, known for his dilatory habits, managed to submit his essay on time. Reading through before authenticating it, the supervisor realised that in the first half of the essay the student had included footnote references for each superscript number in the text. Then the student seemed to have run out of time or stamina, for in the second half of the essay the superscript numbers were there but with no footnoted references to support them. Would it be ethical to allow the student to add the footnotes, under supervision?

Musing on these two scenarios, I remembered a third situation, though in terms of time this was the first, a week or so before the two related here.

Situation 3 : while trying to learn more about Microsoft Word’s bibliography feature, I have come across Citation Placeholders. There are quite a few YouTube videos to show me how to do it, but having watched them, I’m not sure that they are suitable for the way that I write. Worse, I think the way they are presented could lead writers into bad habits. (I am happy to be steered in another direction or persuaded otherwise, but let’s see first where this goes.) 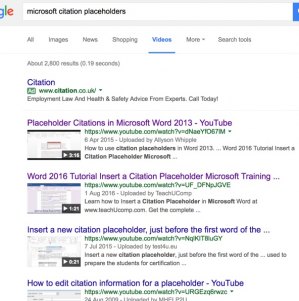 I viewed just two clips, right at the top of the Google search returns.  Both videos showed how to add a placeholder in an already completed essay. What struck me is that writers are advised to edit the automatically generated [Placeholder] with whatever they can remember, an approximation of the author’s name, part of the title, whatever, and come back later to edit the placeholder as necessary, correcting spelling, adding page numbers or other authors and so on.

These three situations are different, sharing a common theme. Each situation features citation problems, citation in the text.

The student in the school in Asia had no citations at all, though she had a full list of Works Cited at the end.

The student in the OCC situation had some citations but had apparently run out of time. He had placeholders of a kind, the superscript numbers, to indicate where he needed to add footnote citations, but those footnotes were missing.

The video clips are, perhaps, further along this continuum; the advice to add what can be remembered of the authors, title, colour of the book whatever and come back later demonstrates intention to declare that these words or ideas are not those of the writer.

Let’s take these three situations in reverse order. Where I feel disquiet with the video clips is that, in their demonstration, they show a prepared piece of text.  In both cases, it is nonsense text of the lorem ipsum variety, several paragraphs of ready-prepared nonsense.

In the TeachUComp video, for instance, we see, left, the writer deciding that a citation is needed, so a placeholder is inserted. Then a stab is made at the author’s name, with the intention stated to come back later and edit as necessary. 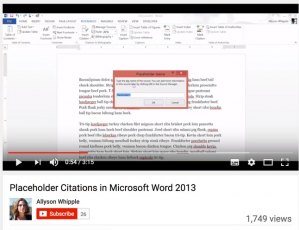 In voiceover, she says:

What a placeholder is, say there’s a point in your umm  You’re trying to manage your references but you know you need something but you don’t quite know remember the details and you don’t want to stop and look it up … you can put in a placeholder and make it easy to find later …

I have to admit, I often use placeholders – but not Microsoft Citation Placeholders derived from the References ribbon – as I am writing. Sometimes I’m not sure of the accuracy of what I am writing, perhaps even the accuracy of a quotation. Sometimes I am not sure of the authorship. If I cannot resolve these immediately, by checking my notecards or looking for verification online, I will highlight the problem sentence/s or author. Sometimes I will add a comment as well.  I will do this if I have a thought but want to develop it later, not losing my train of thinking as I continue developing my current theme.  Again, I make it stand out, by highlighting it, changing the colour of the font, so I do not miss it when I go back to it.

The difference is that I do this as I go along.  I know when citations are needed as I write. I know what thoughts are incomplete, or need developing or checking. I do not wait until I have finished, then go back to see what I need to check.

It is surely unhelpful to demonstrate writing a complete piece of work AND THEN going back to find the places in which citations are needed. It is not good practice. It can lead to missed citations, and thus plagiarism. It can lead to attribution to the wrong source because the writer has forgotten or mis-remembered which source provided these words, these ideas, this information.

It seems to me that best practice is to write from notecards throughout, so citations can be added as you write, quotations checked for word-for-word accuracy as you write them, paraphrases and summaries and other forms of data checked for accuracy – and to ensure that you have put the right author to the right quotation or summary.

Second-best practice is to highlight when you are not sure of the accuracy of a quotation or your data, not sure of an author’s name. Ideally, this will happen – if it has to happen at all – only occasionally, when you are writing as described in the previous paragraph but a new thought comes to you, an apt quotation, something outside your original mapped ideas. The highlighting stands out – by definition, as it were.

Terrible practice is when you miss checking and correcting those incomplete or possibly inaccurate citations, terrible when frail memory clicks in and you insert the wrong source. This is what the OCC student did, and he ran out of time.

Why, I wondered, did the student feel unable to explain his situation and ask for an extension? Was he so frightened of internal school punishment that he was willing to risk an inevitable charge of academic misconduct which could blight his future career? Would it be acceptable, ethical, to allow him to add the footnotes, under supervision to ensure that he did not further research, made no other changes to the essay? That might depend on whether he had actually signed off to the effect that he had acknowledged every incidence of use of someone else’s work. It might depend on one’s interpretation of the flowchart in the IB’s Handbook of Procedures, which allows for completed work to be “corrected” in certain circumstances.

Meanwhile, disastrous practice is to include no citation markers and no placeholders, at all.  That is what the student in Asia did, and she was in very hot water indeed.

Where it gets particularly worrisome (in her case) is that she had no intention of cheating. In the stress of writing her essay, she stopped thinking. She had been instructed to check that she had included citations for all of the sources she had used – and she included citations. References. It’s that confusion I mention every so often, the confusion between citations that go in the text and the references to which the in-text citations link, at the end of the paper. Use the terms inter-changeably and students – and teachers – are confused. It happens. Not often, perhaps, but it happens. Here, it did.

If we demonstrate our honesty by citing in the text at point of use, then it seems so important that this is what we do, as a matter of course, a matter of habit – in all our work and from the earliest stages of education – and life. It is not the list at the end which demonstrates honesty, it is citation at the point of use in the text. The Microsoft Placeholder videos demonstrate bad practice; citation as afterthought. The two students exemplify the dangers of this, they demonstrated bad practice, dangerous practice.

I do not know what the school decided to do in the second situation, the citation markers which lacked the citations. I do know what happened to the student in Asia: she pleaded her case with her principal, and he ruled that she should put right her omissions in an extended detention, no further punishment or consequence necessary. She wrote later that she had learned a valuable lesson, learned from her mistake. A mistake she swears she will never make again.

Do we take too much for granted? I wonder. Do we assume that, because the students we teach can write, we assume they know how to write, how to write in academic style, for academic purposes? I’m not so sure.

Rule number one: it seems so simple – and it is simple, for those who know, to those who practice good practice. “Cite as you write.” It’s a simple mantra, easy to remember. Cite as you write and you can’t go wrong. Let’s get the message across!