Regular readers will know my opinion of the (so-called) Harvard referencing, but in case you don’t, it is low. (If you don’t, then see, as instance, the three-part post which starts at Harvard on my mind 1.)

So there was some delight and much sinking feeling when my daily GoogleAlert for [plagiarism] today brought up the hit How to Reference Your Sources Using Harvard Referencing. 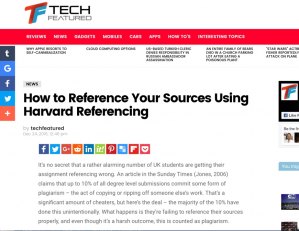 The first line or so of the alerted post by someone signing in as techfeatured reads:

An article in the Sunday Times (Jones, 2006) claims that up to 10% of all degree level submissions commit some form of plagiarism – the act of …

It wasn’t just the mention of Harvard that set the alarm bells ringing and the red flags flying. It was the statistic itself, that 10%, and the ten-year old source. Surely there is more recent research, surely the rate is higher? What is meant by “degree level submissions”?

Today (as I start drafting this post) is Christmas Day, so perhaps this was a present I could not refuse.

The article was posted in Tech Featured just a day ago, 24 December 2016. Bang up-to-date, well done, Google Alert. But there was much in the article that jarred.

Just for starters (and apart from that 10-year-old article):

2  The sample example reference for a book 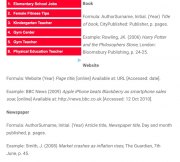 surely published before 2006, and shouldn’t it be ““Philosopher’s” and not “Philosophers” – there is an apostrophe missing?

2a The page numbers, needed only if this is a chapter or a paper in a book of readings, not if the full book is referenced?

3  Punctuation throughout: including inconconsistent capitalisation: the Harry Potter book is Title Case, the other references are Sentence case;  the examples do not always follow the pattern (“formula”) shown:

4  The capitalisation of the author’s name, no italics used at all, for article title nor for newspaper title,  and the lack of date or page number in the foot-of-the-page reference for Jones’ article

5  And the suggestion that reference generators such as Neil’s Toolbox, Scotchbib, and  CiteThisForMe would enable correct Harvard referencing which, apart from suggesting that there is a correct form of Harvard, named two referencing tools which were new to me

It’s a mass of confused and confusing advice which I might well have dicarded without further thought.

BUT, there was also ta sentence at the start of the second paragraph and that just set my nerves a-jangling:

There’s various ways to reference the sources of your research but the main method in the UK, and the one 95% of universities use, is the Harvard system.

The whole piece jarred. Unhelpful, misleading, horribly wrong – and it did not ring true… Why that 10-year-old source? Jar, jar, jar – my teeth were on edge. They hurt.

That declaration “There’s various ways to reference the sources of your research” proved too tempting to let slip by. I copy-pasted the phrase into Google – and Google came up with 1 hit 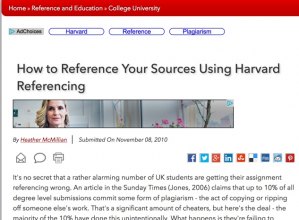 an ezine article by Heather McMillian and dated 8 November 2010. It was  98% identical to techfeatured’s post, mistakes and all, and was, of course, dated 6 year’s earlier.

The (estimated) 2% difference were in the last few lines, where the writer provides a direct link to one of the 3 recommended reference generators, a link to a university guide to Harvard, and a link to the author’s home page on ezines.  (This was her first and apparently only article.)

The Google search did tell me that

In order to show you the most relevant results, we have omitted some entries very similar to the 1 already displayed.
If you like, you can repeat the search with the omitted results included.

so of course I had to see how many similar entries there were. 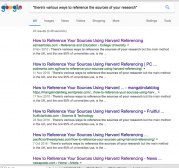 Twenty-three! [Twenty-three – possibly more once Google indexes this blog post.] Twenty-three, fifteen of which carry the same title, How to Reference Your Sources Using Harvard Referencing (and another six with VN country suffixes in the URL and a different but same title Chuyên trang nghiên cứu bao da – ốp lưng)

Some, such as Nocomp’s post, are re-posts and do credit Heather McMillian – usually at the end rather than the beginning of the post – and without referencing as just advised in the reposted article!

Others such as iPhones Tutorial and PCDreams make no mention of McMillian. Nor, of course, techfeatured, my original Google Alert.

I couldn’t help wondering why the post has gone “viral” – if fifteen recent re-posts counts as viral – in the last few months. Reposting happens a lot in social media, and a lot of it is lifted from other people, unattributed. That is plagiarism.  Isn’t there something ironic when a plagiarised post is advice on how not to plagiarise (however confused the writer and the re-poster are)?

A gift that keeps on giving

The GoogleAlert was a wonderful present (and clearly I have nothing much better to do on Christmas Day in the evening).

I took a look at the three reference generators which McMillian recommends, and used as a constant item a book received as a present that morning, a new collection of Alan Bennett’s diaries.

One thing was quickly apparent: I seem to have been mistaken in my understanding of page numbers in Harvard references. Mistaken all along. I thought that when page numbers are used in a bibliographical reference, it indicates that this is a particular paper or essay in a collection or a book of readings, maybe a chapter in a book when each chapter is distinct or is written or compiled by a different person.  There should (I thought) be two titles, one for the article, paper, chapter actually used, and a second for the collection in which it was found; then you need the page numbers, for easy finding within the container.

A citation in the text is different: here one includes page numbers, yes … but at the end?

But the template forms of all three of these recommended reference generators ask for page numbers as one of the elements when referencing a book. Perhaps I’ve had this wrong all along, at least for Harvard? 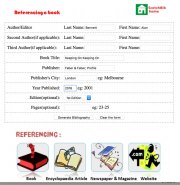 ScotchBib’s Automatic Harvard Referencing Generator  states the use of page numbers is optional,

while Neil’s Toolbox Harvard Style Reference Generator will not generate a reference – Woops! you missed something out – unless and until I include page numbers.

CiteThisForMe does not care.  It asks (in its manual version), but will generate a reference without. Optional, I guess. 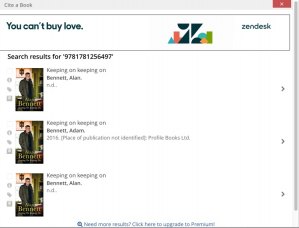 CiteThisForMe is the only one of these three tools which offers an auto-cite facility as well as a form to be completed “manually” . When I typed in the ISBN of my book, I was offered two very incomplete suggestions for the book by Alan Bennett, and one somewhat more complete suggestion for the same book, but this by Adam Bennett.

The wrong name would not matter, in this instance, because Harvard (in these three varieties) uses initials only for given names.

None of the tools advises me on punctuation of titles. In the manual templates, I typed in the title of the book as it appears on the book’s title page, Keeping On Keeping On.  It is in Title Case, and none of the reference generators advised me that Harvard usually uses Sentence case, upper case for the first word only.

And I was not surprised (are you?) that the three tools offered me four different Harvard style references.

Bennett, A. (2016). Keeping on keeping on. 1st ed. [Place of publication not identified]: Profile Books Ltd.

ScotchBib is a simple tool designed for students at Scotch College Melbourne Australia, so the very different punctuation and slight difference in the order of the elements is not unexpected.

Those page numbers? If you are wondering whether you too have got it wrong all along, I don’t think so. None of the style guides published by various universities around the world – at least those I have looked at, and I have looked at many and have today re-checked a few of them – states that page numbers are needed when an entire work is referenced. I don’t see it in any list of References in articles or papers which (appear to) use Harvard.

It appears to be coincidence, or perhaps copy-cat usage, that the three Harvard referencing tools which McMillian recommends all suggest that page numbers are needed. They are not. (But, gentle reader, do put me right if I am still wrong. Please point me – us – to a guide which advises that they are needed when referencing an entire book.)

If Mcmillian (and those who unthinkingly reposted her article, without or with attribution) got her facts and her referencing wrong, were there other errors?

I  started wondering about that article and the statistic, S Jones’s article in the Sunday Times which had inspired (?) McMillian’s original post.

I do not have a subscription to the Sunday Times, so am paywall-barred from finding the original article in the archives.

BUT … I do find references to a Sunday Times article by S Jones, On the prowl for copycats.  You can find it too in, for instance, Julie Price’s PhD thesis Plagiarism in Higher Education: Consensus and consistency when punishing student cases, and in an earlier paper by Julie Price and Robert Price, Finding the true incidence rate of plagiarism. In both papers, Price (and Price) give the reference

Note, 15 June 2003 – not June 2006 as McMillian and her own copycats would have it. And 2003 does seem more likely.  For a start, June 15 of that year was a Sunday. The paper by Price and Price was published in the International Education Journal in 2005, with a footnote stating that this paper had first been presented at the (First) International Plagiarism Conference in Newcastle the previous year (2004!).

Doesn’t that sound credible? When Price and Price’s paper was first presented, Jones’ statistic regarding 10% of submissions was recent, it was current. It was not 10 years out of date. I suspect that McMillian adjusted the date for her 2010 ezine article to make it seem more recent, and could not bother to check a 2006 calendar to find which dates in June were Sundays.  Doesn’t that seem more likely, given McMillian’s general lack of expertise? Otherwise we are asked to  believe that Price and Price could forecast and quote from an article which would not be published for two or three years!

3 thoughts on “A gift that kept on giving…”