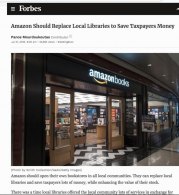 At the core, Amazon has provided something better than a local library without the tax fees. This is why Amazon should replace local libraries. The move would save taxpayers money and enhance the stockholder value of Amazon all in one fell swoop.

Thousands of people, perhaps hundreds of thousands, responded in those various platforms, mostly – but not all – crying out against the views expressed; Amazon’s physical bookstores are not the same as a library, they are not a substitute for a library, libraries offer so much more than any physical bookstore, even Amazon’s.  The outcry was not just in Forbes’ comment column nor just on social media.  The world’s mainstream media took up the story too, few of the publications or those commenting on them showing any support for the notion. The UK Guardian newspaper headlined its report on the Forbes’ story “Twaddle.”

Not everyone commented adversely. There are many who feel that libraries – especially public (publicly funded) libraries – are an anachronism, no longer needed or used in the 21st century, that funds could be better spent elsewhere and/or that taxes can and should be reduced, that local community initiatives will suffice.

Dawn Finch, a past-President of CILIP, the UK’s professional association of librarians and information professionals, is reported in The Bookseller as describing Mourdoukoutas’s piece as “dripping with privilege.”   Coincidentally, just a few weeks before the Forbes article, Finch posted an article What is a library? in her blog A Medley of Extemporanea.   Hers is a passionate piece which answers the Forbes article before it was ever published, including evidence that the cost-benefit or return of investment from libraries is generally four or five times the amount invested in them – and perhaps even more (see the Arts Council England’s report: Evidence review of the economic contribution of libraries).   The pennies we might save in taxes would cost us big in so many other ways.

Forbes deleted the post from its website just a few days, possibly just a few hours, after posting – but this is not news either.  The deletion may have been reported even more widely than the original article – and is still being reported as I write.  A Quartz writer, Thu-Huong Ha, cites an unnamed spokesperson for Forbes as explaining:

Forbes advocates spirited dialogue on a range of topics, including those that often take a contrarian view,” a Forbes spokesperson says in a statement. “Libraries play an important role in our society. This article was outside of this contributor’s specific area of expertise, and has since been removed.
Forbes deleted a deeply misinformed op-ed arguing Amazon should replace libraries

It is easy – and common – for posts to be removed from FaceBook,  Twitter, and other social media.  It seems to be the trend. No apology necessary, just do the damage and escape.

Forbes magazine is NOT social media. Deeply embarrassing for Forbes as Mourdoukoutas’s piece might be, its deletion raises questions.  The article existed, it was on the record. Copies of the article abound on other sites, screenshots of the top-screen abound and don’t go away.

Not so with the Forbes website.  Follow the links to find the original (it was posted at https://www.forbes.com/sites/panosmourdoukoutas/2018/07/21/amazon-should-replace-local-libraries-to-save-taxpayers-money/) and you get a wry touch of humour, not really funny in this circumstance.

I can’t help thinking that, instead of claiming that “We can’t find the page you requested,” it would be far more honest of Forbes to admit that the page has been deleted – and preferably include a statement as to why it has been deleted.  Maybe something more convincing than the “article was outside of this contributor’s specific area of expertise” – or failing that, an explanation as to why the piece was commissioned in the first place, why the editor accepted it, and especially, why they think matters of public taxation are outside the expertise of a university professor of Economics?

Or perhaps – and maybe even better – an explanation that they are deeply embarrassed by the article and responses to it; they could even publish a responding op-ed?

After all, isn’t the point of an opinion piece that it is a matter of opinion, however slanted and minority that opinion might be?   Unless it is so outrageous that it cannot be published at all.  It was published. Forbes cannot do themselves any good blaming the professor for allegedly writing outside his area of expertise. How many newspaper and magazine articles published every day, written by people writing outside their areas of expertise?  If there is blame, it has to lie with the editor, has to lie with the magazine.

Just as serious a matter to my mind, the record appears to have been removed from the Internet Archive as well.  The IA’s Wayback Machine did manage a few snaps 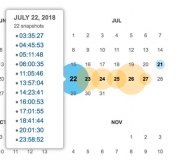 – but then it started getting those 4-0-Forbes error messages, the page could not be found. Trouble is, the original snapshots have disappeared too. Almost. Click on the snapshot and briefly, very briefly, the page as captured appears – and then disappears. See for yourself. 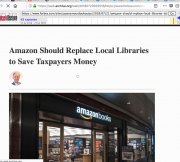 and less than a second later, it’s gone: 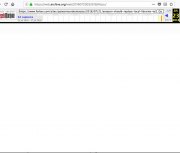 Who “disappeared” these first captures? Did Internet Archive get a request from Forbes itself?  Is it possible to hack into the Internet Archive/Wayback Machine and to change the record? Here too disclosure would be good.

Fortunately, the Internet Archive is not the only cache machine available. Here is the Googlecache capture: 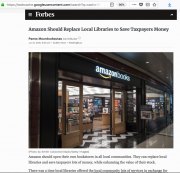 The article existed. It was published. It is a matter of record, however much the publishers wish it wasn’t.

It is dangerous stuff, this playing with history, this change of the record…  It is another form of manipulation.  It’s far too common, and this is not the first time I have commented on the issue (see, for instance, The memory hole and Wrong to be forgotten?

But this was published in a week when an article in BBC News Vote Leave’s targeted Brexit ads released by Facebook  reported on how FaceBook was used to provide advertisements targeted to particular groups of people in the Brexit campaign before the referendum in June 2016. Many of the advertisements were distortions of the truth, some downright lies and fabrications.  Not everyone got to see the messages.  They were aimed at sympathetic individuals to reinforce beliefs, to play on fears and to cement prejudices. Truth did not matter, the advertisements played on feelings, and powerful they were.

One problem with targeted advertising, a real problem when the information carried is manifestly untrue, is that those with different views have no means of knowing what is being said, they cannot refute the claims.

There is nothing new here – the dangers have been known and discussed for years.

In 2014, Robert Epstein told us in USNews, How Google Could End Democracy : Research suggests that Google has the power to manipulate elections around the world and Jonathan Zittrain told us in the New Statesman that Facebook could decide an election without anyone ever finding out 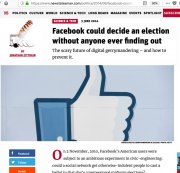 Only we are finding out.

The Forbes article has not completely disappeared; it has been too well spread.  It does make one wonder …

It’s a dilemma. We don’t want mistakes to be erased, just because they are mistakes. They are part of the record.  But at the same time, we don’t want misinformation and disinformation left available to infest and infect impressionable minds. And who is to say?

One part of me says we need “health warnings” – statements of retraction or objection on articles such as the Mourdoukoutas article; we need “disinformation warnings” on the fake news, the information posted with malicious intent, once it is discovered.

“Discovered”?  We tell our children to beware people who say, “Let’s keep this our secret.”  It’s a danger signal that something is wrong, that we don’t want others to find out. Perhaps it’s that targeted advertising we need to eradicate – making information available only to a certain people, certain sections of society.

The Parliamentary Committee may come up with recommendations on how to curb targeted misleading misinformation.  Maybe it is too late to stem the tide.

It behooves us not to take anything on trust, not unless we really can trust the source. In the meantime, keep digging, don’t stop thinking.