There – I’ve made clear my bias, I’m not a fan of footnotes.  Or endnotes.

For one thing, they get in the way of my reading.   That’s ironic, in that one of the claimed virtues of footnotes is that they don’t get in the way of the reader, unnecessary details such as authorship or extra detail or explanation can be relegated to the foot of the page (or the end of the paper/ book).  If readers wish to follow up or find out more, the footnote is there to give the necessary information; if readers do not want to follow up, then they just carry on reading.  The Center for Teaching and Learning at Yale Universtity puts it this way, in a page titled Why Are there Different Citation Styles?

When developing a historical explanation from multiple primary sources, using footnotes instead of inserting parenthetical information allows the reader to focus on the evidence instead of being distracted by the publication information about that evidence. The footnotes can be consulted if someone wants to track down your source for further research.

If the writer thinks the author or the source cited is important, then that information can still be mentioned in the narrative in the text, with full details in the footnote. When the author or source is not considered important, why intrude on the flow of the reading?

Science isn’t all about facts, it’s about theories and ideas, thus the notion that knowing the team behind the research and the recency of the research makes author-date citation systems popular in the sciences, the reader can find the necessary information in the text, in the narrative, and is not distracted by having to look up a footnote.

That’s one important point – taking your eyes off the narrative to read a footnote can itself be a distraction; it is sometimes difficult re-finding one’s place in the text, especially when those unobtrusive superscript numbers are small and faint on the page, perhaps to lesen their intrusion even more.  It can be even worse when the note is at the end of the paper or the book, you need to keep one finger on the page while turning to the back, and it is all too easy for that finger to lose its place in the book.

And don’t you just hate – I do – those books in which there is no superscript number, the endnotes refer to the page in the text; it’s not a lot better when the endnotes are presented chapter-by-chapter but you don’t remember which chapter you are reading because there is no chapter head running through the chapter to remind you?

Even worse, when there are no notes, just a bibliography, often extensive, but with no indication of which book has enabled the writer to make this statement, that statement, one has to take it all on trust…

Many students love footnoting systems; they think they help reduce the word-count.  That can be important, in IBDP extended essays, for instance.  Bibliographic footnotes are not included in the word-count.  If you don’t need to state the name of the author in the text, then you can reduce that word-count. Except (I often feel) they don’t, especially if the quotation or thought has to be introduced with a convoluted passive, impersonal or neutral statement such as

It has been shown that
Research suggests that
and so on

And then again, it seems acceptable in the writing conventions of some subjects to avoid that linkage, those citation markers – though this can lead to confusion between the writer’s own ideas and statements and those which are supported in the literature.

All this helps explain the some of the frustration I commonly experience when reading texts with footnotes – and even worse, with endnotes.  My current bugbear is Yuval Noah Harari’s Sapiens: A Brief History of Humankind (London: Vintage, 2014)  I’ll use this as an exemplar, but it is a feature of much popular non-fiction publishing.

The issue is, my issue is, that footnotes do not (always) help the reader. They do not help this reader. 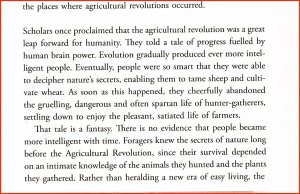 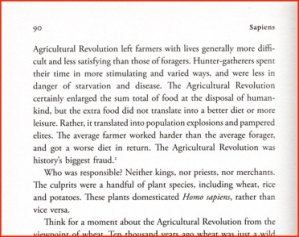 It’s an interesting notion – and that last sentence is absolutely startling. But … how do I use it, whose idea is this?  The superscript 2 should give us a clue: the endnote indicator leads us to 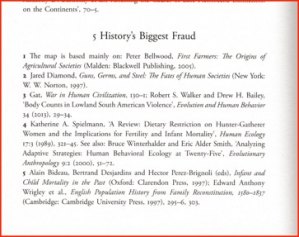 But we still don’t know, is it just the last thought (“the Agricutural Revolution was history’s biggest fraud”) that is Diamond’s notion, or is it the whole paragraph?

As far as I remember, and a quick skim through his book would seem to confirm it, Diamond did not argue that the Agricultural Reviolution was a fraud.  Diamond does point out that the Agricultural Revolution was an important step in the history of civilization and that it was not roses all the way; he suggests that plant and animal domestication contributed to population explosion and settlement which demanded ever more food, ever more need for agriculture … a vicious circle which led to the growth of towns, cities – and disease,  weapons, industry and commerce and competition and more.

That superscript number is misleading. I think it should be placed before that last sentence in the paragraph.   The last sentence is Harari’s, not Diamond’s.

I am confused.  It’s a confusion which, I think, could easily be avoided with an in-text citation or two, a link which clarifies who is responsible for what:

Here’s a later passage from the same book, page 392: 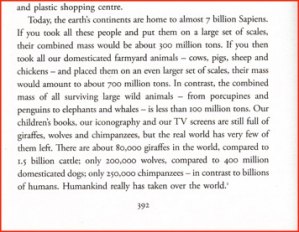 The superscript number leads to a double-citation:

and once again we have to ask, who is responsible for what?

Are the two cited authors (Vaclav Smil and Sarah Catherine Walpole et al) responsible for all the information in this paragraph or just for the last sentence?  Which fact came from which source – or do both sources record exactly the same data?  Or maybe it is just the last sentence, “Humankind really has taken over the world” that is attributable to both sources? Or once again, is that last sentence Harari’s summing up of the evidence presented in the paragraph?

This is not helpful to the reader.

Further investigation reveals that those mentions of animals and their numbers come from neither Smil nor Walpole et al.  Their concerns were with biomass, not with the dwindling numbers of wild animals, certainly not with this level of detail and the naming and numbering of specific animals.  From where did Harari get these figures? I don’t know – other than it was not from the two cited authors.

Yet this is a feature of Chicago/ Turabian, the ability to lump together one’s citations in a single footnote, leaving the reader to guess (or painstakingly find out) which item of information comes from which author, and which is the writer’s own opinion.

I said earlier, “For one thing, (footnotes) get in the way of my reading.”  If historians and others want to use footnotes, fair enough, this is common in the discipline. But it is not just Harari’s work that leaves me irritated and frustrated, it is most works that use the convention. That’s a pity because I do enjoy books on history, science,  modern culture… but my training and my thinking keeps making me ask, how do you know, where did you get this information from, how can I check that this is so?

So there – as a reader, I have several problems with footnoting citation/referencing styles.  The way I read – and surely I am not alone in thinking this? – they are not reader-helpful styles.

I have problems with footnoting styles as a writer too (and so do students).  But these I shall leave for my next post.

Edited 12 October 2018 : the third paragraph (“When developing …”) should have been indented to indicate a verbatim quotation; this is now corrected.

When copy-pasting from a draft in Word to the blog platform, indents tend to be lost.  I am usually more careful in my proof-reading; my apologies for any misapprehension caused here.

1 thought on “Not a friend of footnotes”