I appreciate that many, many people, readers and writers, do like footnotes and endnotes, and that’s fine with me. I’ll put up with them if what I read is interesting, I’ll use them as a writer if my editors demand them.  I’ll agree that they may well suit particular forms of writing and different media. But I do not like them.  In this post and the next, I’ll detail some of the reasons why I don’t like them, particularly as a writer.

[I’ve been told that my two-weeks-ago post was unfair. Here I described some of my problems as a reader, and I used some illustrations from Yuval Noah Harari’s Sapiens to make my point, illustrations I used in a workshop soon after. “But he’s not using endnotes properly!” I was told.  “He shouldn’t use several authors in one endnote, they should be distinct.”

[Far be it for me to suggest that Harari is using endnotes wrongly, especially as Turabian (9th ed.) states

16.3.5.1 CITATIONS. If you cite several sources to make a single point, group them into a single note to avoid cluttering your text with reference numbers.

[Harari is not unique in lumping together several thoughts in a single note; this seems to be a publishing trend, one I find unhelpful, especially when the superscript number in the text forces me to the end of the book rather than to the foot of the page. But even footnotes detract.

[And the point is, surely, that if a prominent academic like Harari is getting it wrong, what chance do students, relatively new to citation and referencing, have?]

Footnoting systems are difficult, for readers and for writers – certainly when they are used following the guidance of the more commonly used style guides. (That’s a generalisation, I know.  For this article, I am relying on Turabian, 9th edition – more properly Kate L. Turabian’s A manual for writers of research papers, theses, and dissertations: Chicago style for students and researchers 9th. ed., University of Chicago, 2017.  Other footnoting style guides may – or may not – give much the same advice.)

One issue with Chicago/Turabian is that writers need to learn two and a half different formats, one for the footnotes, one for the bibliography, and the half for shortened footnotes. 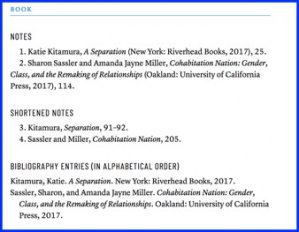 (All the screengrab illustrations used in this post are taken from the Turabian Quick Style Guide.)

But this is not carried through consistently – as in the example for a web page: 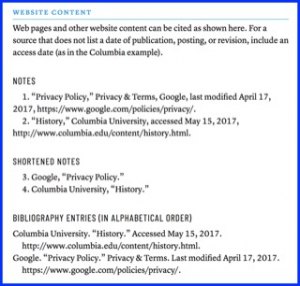 In these examples, the authors are presumably not known – but the publisher in the note becomes the “author” in the shortened note and in the bibliography.

There is no direct link – “Privacy Policy” does not directly link to Google.  This can make it difficult to go from the foot of the page in the text to the references in the bibliography, you’d be looking in the Ps for “Privacy Policy” and not finding it because the link-term is Google.   It could be even harder working backwards, finding the reference in the bibliography and wondering where in the text the note is inserted.

I’m not convinced by those shortened footnotes either.  They require the reader to read and remember all footnotes as one reads, even if you aren’t interested at the time.  But if you come across a later footnote that you want to chase up – and I often do – it is not helpful to be referred to ibid or to “Jones, Masterpieces…”. This can be important, for instance if you want to know when the text was published but the shortened footnoted does not include a date. It is even more irritating in those texts for which the writer has chosen not to include a bibliography, the first footnote is all you get by way of full reference.  If you can find it.

Lack of a bibliography is another bugbear for me as a reader, especially when the essay, paper or book is long: I often want to know how many times a particular author has been mentioned; I often want to know how reliant the writer has been on particular authors; authors who are prominent in a subject may well have more entries in the bibliography, and this too can be useful if I want to read more on the subject.  Without a bibliography, I am forced to remember sources as I read.

Fortunately, IB assessments require a bibliography, regardless of the advice given in the chosen style-guide; as ever, the rule-of-thumb is: give IB what IB expects/ demands, whatever the style-guide says.  That helps when I am reading student work – but I don’t read published professional work in the same way that I read student work.

It is fortunate that IB examiners are not concerned with the correctness of formatting; what they seek is consistency of formatting and completeness, the inclusion of (at least) all the elements which will help a reader track down a referenced source for themselves.

Would that Turabian was consistent. Alas, there seem to be so many exceptions, different rules (often petty?) for different situations and sources, for example :

It takes several reads to take that in – and in practice, in the writing. one may constantly be checking with the manual to ensure that you are getting it right – and by “right”, I mean ensuring consistency.  There is just so much to remember. It is especially hard on students new to citation and referencing, especially if they are simultaneously required to use other styles for other teachers, subjects or disciplines.

I have restricted myself to the online Turabian Quick Style Guide here. The print manual includes other inconsistencies and difficulties for writers – and readers.  I’ll be considering some of these – and more – in my next post.