As I say, EasyBib makes it easy to shoot ’em down.  I probably would not have bothered this time, except that, clearing my inboxes (long overdue), I came across an EasyBib blog post which chimed (indirectly) with thoughts in a pending article of my own which I had got stuck on.   I think the EasyBib article has unblocked my thinking – not this post but possibly the next.

The article in question is Typing or Writing Notes: Which Is Best? posted by EasyBib User on 9 January 2019.  EasyBib User is – was – a frequent contributor to the EasyBib blog, posting at least 5 times under this name between April 2018 and January 2019. This particular post appears to be her last.  (One of the five posts includes an author name as well as the pseudonym, so I think I can call her “she.”)

An EasyBib user this blogger might be – but it seems clear that she has not used EasyBib to compile the Works Cited list for this post.  Or maybe she did, maybe it is EasyBib itself which is responsible for the errors in the list.

There is not much to ponder in the article itself, although the writing style is sometimes convoluted, perhaps even more convoluted and confused than mine.  This, for example:

Notes quickly typed out are sure to still be legible when you go back to study them, while notes that were quickly written down by hand may not always be tidy enough to read back, especially if you know that you have less-than-impeccable handwriting.

I wonder if EasyBib User was paid by the word? There are quite a few unnecessary words here – and it seems to be the self-awareness of your handwriting style rather than the handwriting itself which seems to impede legibility.

But it is the short list of Works Cited that exercises me. There are just three items, and the formatting of each of them is inconsistent with the other two.  We do not know which referencing style was used, although I strongly suspect it was MLA.   For certain, it is an author system (and not an author-date or footnote system),  and the list at the end is headed “Works Cited,” both suggesting MLA or a similar system.  It is not MLA8, at least not MLA8 used correctly, since the one URL includes the protocol “https://” – and it is not MLA7, given that there is no indication of the format, “Web” or “Print.”

It may be best not to worry too much about the exact style guide used. The main concern is consistency.

There are three citations in the text (in the order that they appear):

These are linked, more or less, to these works in the list of Works Cited:

Let’s take them one at a time, in order of appearance.

The first thing that stands out is that there is no mention of May’s article in the text. In the text, the article is attributed to Scientific American, not to the author. This is poor citation practice and it is unhelpful too.  It is not too unhelpful in a short Works Cited list such as this, but imagine a Works Cited list with many entries; it could take a lot of close reading to match the magazine cited in the text with the  magazine buried in the list of Works Cited.

The second thing is that this magazine is recorded as Scientifica American in the list of Works Cited.

As already noted, if this is MLA8, then we do not need the https:// – and nor do we need the URL to be italicized.  I wonder which of the 7000 citation styles available in EasyBib Plus does italicize its URLs?

And finally, no date is given for the article, although it is clearly there on the webpage, June 3, 2014. 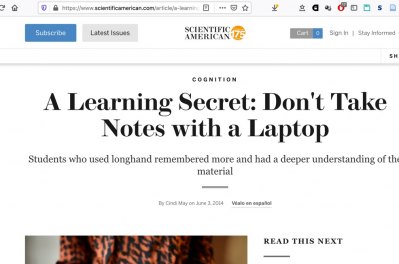 The second item cited is the study published by Mueller and Oppenheimer:

The link in the text takes us to the Sage Journals site and an article which is paywall-protected, note the padlock in the Access Options button: 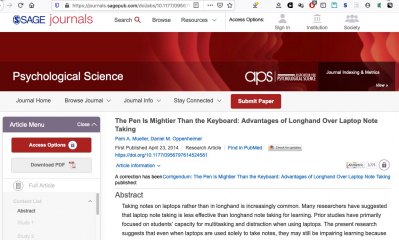 Did EasyBib User access the article on the Sage site – or at least, this abstract?  Did she find the full article in the print version of Psychological Science?  One has to wonder, did she access it at all (or did she rely on the very full summary provided in Cindi May’s article)?

We can also see that if she is using MLA, EasyBib User has not used SagePub’s citation generator, which shows: 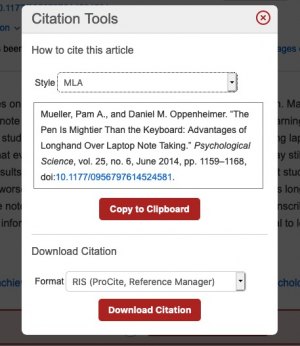 And so to the third citation:

The hyperlink in the text takes us to a site which is no longer there. Thanks to the wonderful Internet Archive, we can still retrieve Bui’s paper as posted on the Bui’s University’s website (Washington University in St Louis, Psychological & Brain Sciences Department).  It is available, freely or paywalled, on other sites too, including the publishing journal, the Journal of Educational Psychology.  The paper was published online in 2012 (as shown in the PDF I downloaded from the university website), and in print in 2013.  The print version includes volume and issue number of the journal, the online version does not – but as it is (presumably) the online version which was used by EasyBib User, those details may be irrelevant.

But both versions include the DOI, and again, EasyBib User’s citation does not. 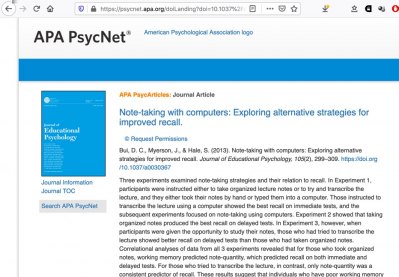 The question remains: does EasyBib User use EasyBib to create her citations?

If she does, then EasyBib is failing her – or she is failing to use EasyBib properly.

If she does not use EasyBib, then how can she claim to be EasyBib User?

This was the last of EasyBib User’s five contributions to the EasyBib blog.  Did she stop writing of her own accord – or was she dropped?  Maybe she realised that EasyBib is not what it cracks itself up to be?

Just out of interest, I entered the URL of her blog page into the EasyBib citation generator. This is what it came up with:

Never mind the inversion of her name, where did that date come from? The post online is dated 9 January 2019. Crazy!

I don’t have to aim cheap shots at EasyBib, it brings itself down.

When evaluating sources, one of the considerations is whether the author cites the sources used – and if so, how well?  Does the reference or works cited list conform to academic or disciplinary conventions?  Is the list complete, are the references complete and internally consistent?

Work which claims to be academic but which includes errors of various kinds may be deemed untrustworthy, and this includes errors of citation and referencing.  I won’t expand on this here, but this is the thinking on which I got stuck, my own article as mentioned right at the start of this post.  I think my thinking is unblocked.   Stand by for my next post.