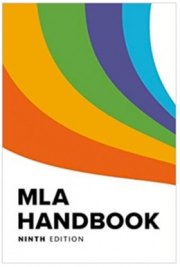 it does not seem long since the Modern Language Association published its 8th edition (MLA8) – but I see that it was released as much as 5 years ago, April 2016. Now, next month sees publication of MLA9, the 9th edition of the MLA Handbook – and yesterday MLA hosted a webinar preview of the new edition.

I well remember my excitement and delight, as that edition seemed revolutionary (as I wrote in MLA8 – new edition of MLA Handbook and Back to basics – MLA8 revisited).  Instead of presenting lots of rules and variations from and exceptions to the rules in an attempt to include all types of known (and unknown) source, format, medium, platform and more, we were given a template to follow with which we could build the references which informed our lists of Works Cited, while still being faithful to the rationale and the principles of academic referencing and supporting our readers.  This was empowering, it was liberating.

The principles of MLA8 citation and referencing are

Cite simple traits shared by most works.
There is often more than one correct way to document a source.
Make your documentation useful to your readers (MLA8, pp. 3-4).

Short, sweet, delightful. And they can be applied to any academic referencing style.

The MLA8 template used the notion of containers, allowing the building of a reference by working outwards from the source actually used to the “container” which included that source and to one or more further “containers.” The template is similar to that used by APA in its Publication Manual (Who, When, What, Where) but with even more structure.

When writers understand the principles of referencing and by building on the template, they can present consistently-formatted references which help the reader appreciate and understand the source/s used, with enough information to enable them to track it down themselves.

By keeping the number of examples to a minimum and also by focusing on references and citations, MLA8 was half the size of MLA7, 145 pages as against the 292 pages of MLA7.  I was delighted. It appears that many MLA users were less pleased.  It seems that the 9th edition runs to more than 400 pages and once again provides hundreds of examples, attempting to cover every type of source in every medium, in every format.

Publishers’ style guides are about more than citing and referencing, of course. They attempt to provide guidance on matters such as punctuation and spelling, capitalization, use of foreign terms, use of language (including inclusive language), formatting of papers including indenting and size of margins, size and style of fonts, use of headings and sub-headings and much much more – including use of other people’s words and work and ideas – so that their publications are consistent, at least within each publication. Writers can write to the house style of the publication for which they are writing.

One reason for the relative shortness of MLA8 was that these extra elements of house style were omitted, MLA8 is mainly about referencing and citation, the use of other people’s work.  MLA9 once more provides this extra guidance.

It appears that provision of references for the list of Works Cited is still based on the three principles of MLA8 – but with examples galore.  I am not sure if this is good or bad.

It will be good if there is still freedom to build references, to decide which elements to include and which might be included (and what might be unnecessary), depending on the level of writing and the audience.  As well as the three principles, the template also still applies.

It will not be good if those teaching and requiring MLA references and citations do not accept or are unaware of options and exceptions.

It will be damaging if students and writers generally are expected to thumb through the handbook looking for the exact example on which to base their references – and disastrous if variance from the style of the example is penalized or punished.  This last approach makes referencing a chore, takes away from the joy of research and writing, of demonstrating or showing off to readers the (dare I use the terms?) professionalism and scholarship of academic work.  It will be even worse, of course, of students are expected to remember the reference pattern for any and every type of source they might use, without recourse to the handbook.

I placed my order for the new edition several months ago. Not long to wait now.  I have to admit I am not as excited about the imminent publication of MLA9 as I was about MLA8.  We shall see.   I will report further. Watch this space!