News reports two days ago indicated that cigarette manufacturer Philip Morris’s takeover bid for Vectura, a UK manufacturer of lung health products, looks set to go through.  This  is not a matter of academic integrity and I am not sure about the integrity issues pure and simple either – but there are surely ethical considerations to ponder, and ponder I do.

Last month, discussing What’s not there, I wrote about e-smoking manufacturer Juul’s purchase of the May-June edition of the American Journal of Health Behavior (AJHB); the Special Open Access Issue on JUUL comprised eleven research studies and two editorial articles on JUUL, all attempting to provide academic studies to establish the public health benefits of electronic smoking products.   This is just ahead of a US Food and Drug Administration (FDA) ruling on whether to allow JUUL to continue making and marketing its products.  Although there seems to be strong evidence to support the notion that e-smoking devices are highly effective in weaning nicotine smokers off cigarettes on to far less harmful substitutes (and thus a public health benefit), there is also much evidence (not reported in the special issue of AJHB) that younger users become addicted to nicotine through using JUUL products and graduate to smoking cigarettes. Thus the FDA hearing and upcoming ruling, thus the lobbying and attempts to influence the outcome.

As well as the ethics of an academic journal selling the full issue as an advertising feature for a possibly unethical business, I also mentioned that Altria had bought a 35% stake in JUUL in 2018.  Altria is owner of several tobacco companies – including Philip Morris, makers of Marlboro cigarettes. Buying into JUUL thus helps Altria claim that it is helping tobacco addicts give up cigarettes while simultaneously selling a product which creates new addicts.

Which is why I have doubts about this week’s news, that Philip Morris’s UK£1bn takeover bid for Vectura is now recommended to shareholders (over a slightly smaller bid from a private equity company) and looks likely to go through.  It is as if Philip Morris’s business plan runs: create nicotine addicts and make money, help them give up their addiction and make money, help them with breathing and other lung problems caused by smoking and make money. This does not sit well.

There is also the danger, highlighted in press coverage of the takeover bid, that lung researchers at Vectura may be unwilling to work for a tobacco company and leave, and also that research hospitals and universities may also block Vectura’s future participation in medical trials and treatments.  Research could be hit hard, and it is not just a matter of money and profit, it really is a matter of ethics, with wider health implications to boot.

But there is another issue here which is more in keeping with the usual themes of this blog, the reportage.

This side of the story starts with a memory lapse: I mis-remembered the company’s name so my first search on Google today was [ventura philip morris]: 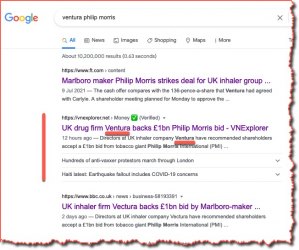 Hit #1 is for FT.com and, knowing that the Financial Times site is paywalled, I went to hit #2, UK drug firm Ventura backs £1bn Philip Morris bid. The Google search shows that the page is hosted on VNExplorer.net, and carries an intriguing white tick in a green check-box alongside the word “(Verified)” about which, more, later.

I also opened hit #3 (from the BBC News site), then went to Google News and opened the #1 hit there, from Yahoo! News Canada. 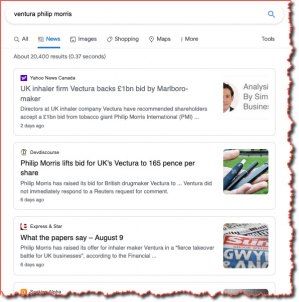 Then I started looking at the pages I had opened.  That first link (Google #2) was the VNExplorer page, UK drug firm Ventura backs £1bn Philip Morris bid. 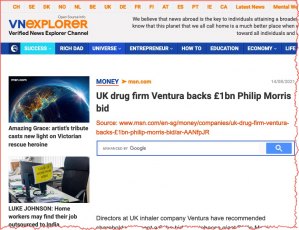 Very noticeable on the page (which is dated 14 August 2021, yesterday at time of writing) is the link to the source of their story, MSN News. It is writ large, just below the slightly larger headline.

As I read down the page, two oddities were quickly apparent. 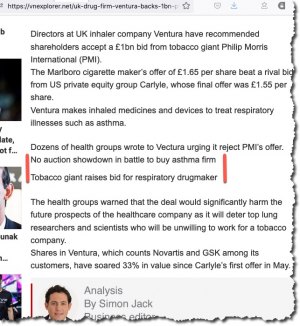 One was the wording of the story in paragraphs 4 to 7:

The health groups warned that the deal would significantly harm the future prospects of the healthcare company as it will deter top lung researchers and scientists who will be unwilling to work for a tobacco company.

The fourth and the seventh paragraphs are about health groups; the two paragrpahs between have nothing to do with health groups.  The paragraphs starting “No auction showdown…” and the “Tobacco giant raises bid…” seem very much non sequitur and out of place;

Just below at the bottom of my screen, there is a picture and presumably an analysis by Simon Jack, Business Editor.  Now that is interesting.  Simon Jack is Business Editor – for BBC News. In fact, I heard him report in a news item earlier today.  I wondered if VNExplorer was a news regurgitator, similar to the regurgitators and re-spinners I came across not so long ago (see Spinning it out).

I called time on VNExplorer and went to the page’s declared source­, MSN – Microsoft News.  And there it is, the original story UK drug firm Ventura backs £1bn Philip Morris bid 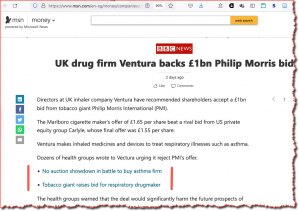 dated “2 days ago” (13 August 2021, I am writing this on 15 August). There is the BBC News logo (hyperlinked to the front page of the BBC News site, not to the actual story, I might add), there is the VNExplorer story word for word (except that this appears to be the origin of the VNExplorer story, not the other way around), and there we have 2 bullet-pointed lines hyperlinked to related stories, those mysterious two lines which had been copy-pasted into the VNExplorer’s copy, without bullet-ponts and without hyperlinks.  (And further down, yes, the picture and the analysis by Simon Jack, Business Editor – at the BBC, not at VNExplore, not at MSN/ Microsoft News.)

The MSN page might not link to the original BBC story so it might be as well that Google had listed this as hit #3.  It was also as well that I had not settled for the first story that I came across, the first I could open, in the hit list.

The BBC story (also dated 2 days ago, thus 13 August 2021) is headlined UK inhaler firm Vectura backs £1bn bid by Marlboro-maker – and it took a few minutes before I realised that I needed to check the name of the company.  It seems to be Vectura, not “Ventura.”  (And curiously, I now noticed that the MSN story uses both Ventura and Vectura, I missed seeing that first time.  I need to work on my reading and proof-reading skills.) 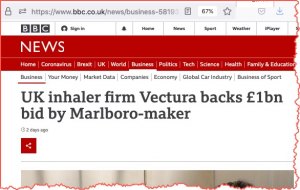 There are other differences.  The BBC story is longer than the stories in MSN and VNExplorer; those other stories have copy-pasted extracts from the BBC article.  I also see that the BBC’s headline describes Vectura as an “inhaler firm” while the sources which copied the story call it a “drug firm.” 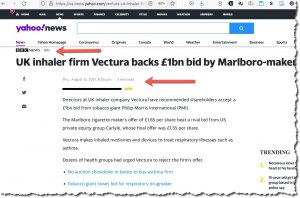 Their story (which uses the same BBC News headline UK inhaler firm Vectura backs £1bn bid by Marlboro-maker), also credits BBC News.  But this story is dated 12 August, 8.26pm – 3 days ago, thus apparently pre-dating the BBC News story of which it is a direct – and full – copy.  It cannot be a time-zone issue, Canada is later than the UK, not earlier.  (Any suggestions, anyone?)

So here we have the story from four different sources – except that three are copies of the original story (and two of these are incomplete copies of the original, both with variations of spelling of the company name).   When we advise our students to go to the source, we mean it, there are reasons for the advice.

Fortunately, a search on Google News for the now correctly spelled [vectura philip morris] brings up reports from Sky News, The Times and others which do verify the story – and report other aspects of it too: 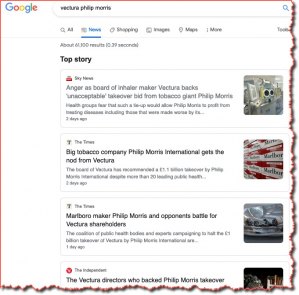 The story is not yet over, ethics may win yet.  And in the meantime, we do have verification from other sources.

Which brings us back to that “Verified” news story in VNExplorer.

Although Google offers a Verification process (for more see Get verified on Google) and finding out more about this led me on a merry wild-goose chase, it is not a fact-checking indicator provided by Google.  The Verified check on the VNExplorer story is a VNExplorer logo, and does NOT mean that the story has been verified by Google.  The VN in VNExplorer stands for “verified” (maybe “allegedly verified” might be better) – and the use of the logo can be verified from these unconnected stories published on the VNExplorer site

The “(Verified)” indicates to searchers that VNExplorer has verified the stories it pinches publishes.  Or at least claims to.  If it really had verified the MSN story, perhaps they might have realised and corrected the misspelling of Vectura? Perhaps they mght have had the full story?

So there is a lesson for us in the Philip Morris/ Vectura story after all: check and evaluate those sources, go back, right back, to the source.

1 thought on “Takes your breath away…”